I have to tell you, I am loving the new fact-check feature on Twitter.

I have used it several times myself, and while I cannot say if it was my alert that they used, the link I provided in one reporet was in the reference, so they really are checking out this information.

The latest fail by the Biden administration was in Biden touting the lowering of the deficit.

So, Joe has been getting away with murder on numbers because they keep comparing their numbers to the numbers during the pandemic.

My cat could be sitting in the Oval Office and get the same numbers Joe is getting right now.

We have seen him twist the numbers regarding jobs “created,” which has been debunked a dozen times at least, and they are doing the same thing with budget deficit reduction.

The budgets for 2020 and 2021 were driven by COVID spending, spending that Democrats pushed.

We have several trillion-dollar packages go out with little income coming in compared to a regular year.

So now Biden wants a slap on the back for having what is actually the fourth largest deficit in history and 41 percent larger than 2019, which would have been the last “regular” year… 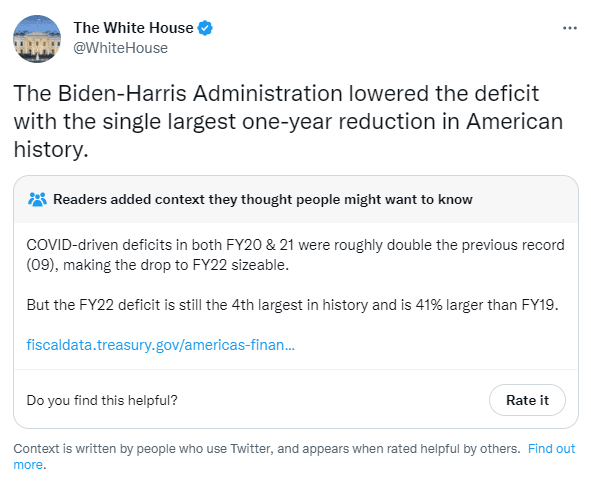 According to the Committee for a Responsible Federal Budget, Biden has added at least $2.5 trillion to the federal deficit, yet this administration keeps talking about surplus and reducing the deficit.

This is now the third major “accomplishment” that Biden has had fact-checked on Twitter, the other being the increase in social security payments.

Between this and the fact the mainstream media is starting to call Biden out for his lies, the old man is in big trouble during a lame-duck session.

February 7, 2023
•
By
Burroughs
1 2 3 … 2,059 Next »
Newsletter
Get news from American Digest in your inbox.
By submitting this form, you are consenting to receive marketing emails from: American Digest, 3000 S. Hulen Street, Ste 124 #1064, Fort Worth, TX, 76109, US, http://americandigest.com. You can revoke your consent to receive emails at any time by using the SafeUnsubscribe® link, found at the bottom of every email. Emails are serviced by Constant Contact.