Elon Musk is going to be a thorn in Joe Biden's side.

Biden has been able to make claim after claim without a single fact check on social media.

On Friday, Joe Biden tweeted out, "Let me give you the facts.

"My Inflation Reduction Act puts an end to this." 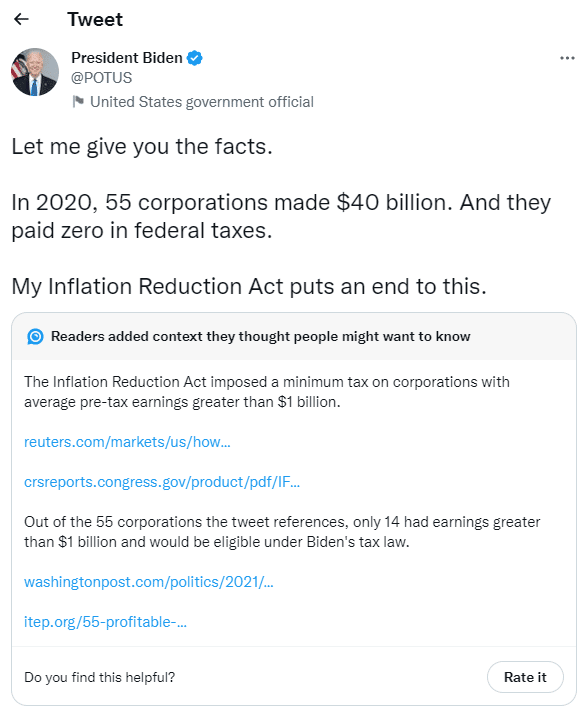 Here is the amusing thing in all of this that will show you how tainted the media is right now.

When the Washington Post fact-checked Biden's statement, that very same statement, it concluded, "This '55 corporations' number is probably in the ballpark but readers should be aware that it's not based on actual tax returns but instead is an estimate of taxes paid based on corporate reports."

"In the ballpark," since when is that acceptable?

I would wager that Musk will put an entire team on Biden's Twitter account to start holding them accountable for their lies.

They better get their fingers ready because that is all that comes out of his face every day.

And while they are at it, they can start to fact check KJP's account too!

February 3, 2023
•
By
Burroughs
1 2 3 … 2,017 Next »
Newsletter
Get news from American Digest in your inbox.
By submitting this form, you are consenting to receive marketing emails from: American Digest, 3000 S. Hulen Street, Ste 124 #1064, Fort Worth, TX, 76109, US, http://americandigest.com. You can revoke your consent to receive emails at any time by using the SafeUnsubscribe® link, found at the bottom of every email. Emails are serviced by Constant Contact.