Biden Appointees Raise a Lot of Questions for GOP

Some of Joe Biden's latest appointments have everyone's ears up a bit.

With all of the pushback regarding drag queen story hours for very young children, we are now finding out that Biden has a few appointees that are going to push this agenda.

Fox News obtained resumes of several Biden appointees to find out they had a history of working with far-left advocacy groups.

Fox News reported, "Resumes of current Department of Health and Human Services (HHS) officials were obtained by America First Legal through the Freedom of Information Act.

"The individuals all were nominated and served time on the Biden administration's Presidential Advisory Council on HIV/AIDS (PACHA).

"They were sworn into their positions by transgender Assistant Secretary for Health Dr. Rachel Levine in August 2021."

Levine, as I am sure you know, is a transgender, and someone that believes transition surgeries should be available to young children if they identify as the opposite sex.

The senior advisor on LGBTQI+ Health Equity for Levine, Adrian Shanker, is one of the individuals in question.

Shanker held a position at PACHA and resigned to take the role with Levine.

While there, the center hosted drag queen story hour for kids, reading such books as "Heather Has Two Mommies."

When the White House was asked for comments regarding the numerous individuals with these far-left connections, it sent a picture of this t-shirt in response… 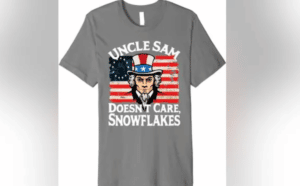 Andrew Bates, deputy press secretary of the White House, stated, "This is our statement, on the record."

It's good to know they take our concerns seriously. That is a response you would expect from a five-year-old, not a presidential administration.

But I guess you can get away with that when the mainstream media ignores every scandal that comes your way.

January 26, 2023
•
By
Burroughs
1 2 3 … 1,920 Next »
Newsletter
Get news from American Digest in your inbox.
By submitting this form, you are consenting to receive marketing emails from: American Digest, 3000 S. Hulen Street, Ste 124 #1064, Fort Worth, TX, 76109, US, http://americandigest.com. You can revoke your consent to receive emails at any time by using the SafeUnsubscribe® link, found at the bottom of every email. Emails are serviced by Constant Contact.